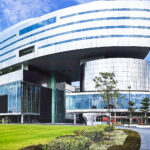 On December 9, 2015, Singapore based Mediacorp made the final move to its new campus at One-North. This move was 10 years in the making with a mammoth effort put forward by all involved.

The campus aptly named ‘Mediapolis’ plays host to a variety of different facilities including a 1500 seater theatre, concert halls, media rooms and an ultra-modern office space designed to nurture creativity and innovation for its employees. The new campus plays host to nearly 2800 staff on 800,000 square foot perimeter.

With environmentally friendly construction in mind, the project was awarded the “Building and Construction Authority’s Green Mark Platinum” rating for its sustainability features.

The simple and smart solution

While Architecture & Design often mean a visually stimulating environment is essential during the planning stages of a project, we find that the functionality involved with keeping people safe comes into play as well. That’s where Kilargo comes in.

The specifications for the building’s requirement were analysed by our team and a solution was formed. Kilargo Acoustic Door Seals were placed into the planning and build phase of the project. Smart, simple solutions for a leading project in Singapore.