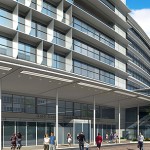 Worth $1.23 billion, the Gold Coast University Hospital will include 750-beds over a nine storey project and will open in late 2012. The hospital will be situated on Parklands Drive at Southport, enabling close ties to be forged with nearby education facilities including Griffith
and Bond Universities and the new Queensland Academy for Health Sciences.

A large variety of door seals were installed within the new hospital.  All were specified for a particular application covering corridor smoke doors to theatre rooms, patient wards and office facilities.  Fire Door Meeting Stile (FDMS) seals were also utilised on pairs of fire doors throughout the healthcare facility.