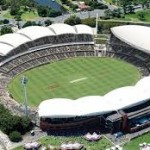 This $560 million redevelopment of an internationally renowned, inner-city stadium combined contemporary design with its famous heritage – including retaining the original scoreboard and many established Moreton Bay figs as features. With seating capacity of 50,000, the new development includes dining spaces to cater for 2000 and a new footbridge across the River Torrens. The project commenced in early 2012 and was completed in March 2014.